There is nothing more magical than being transported into a Christmas wonderland resplendent with illuminations!  Dark spaces lit up with the brilliant glow of twinkling lights instantly puts me in that Christmas mood.

A few years ago, we spent Capo d’Anno (New Year’s) in Milan and were treated to the beautiful Swarovski crystal light display in the Galleria Vittorio Emanuele.  The bright blue lights shimmered up in the dome of the Galleria and they could be seen from outside the entrata (entrance), leading you in with the anticipation of a wondrous delight.

It was a beautiful display, only to be outdone, I think, by this year’s  very special exhibition called “Una Amore di Citta`”.  A spiral of pulsating cuori (hearts) in Swarovski’s signature design will cascade from the dome of the Galleria from Dec. 4th until Jan. 6th. 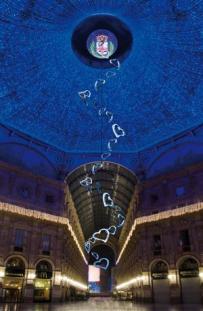 Sadly, I will only be able to enjoy this spettacolo (spectacle) via internet, but….

San Francisco has it’s own magical twinkling displays.  They may not be of Swarovski crystals, but they are, nonetheless, just as meravigliosi (marvelous)!  I was mesmerized by their bellezza (beauty) this last weekend while visiting the City for its Christmas magia (magic).  The lobby of the modern Hyatt Regency Hotel at the Embarcadero was decorated in a cascata (cascade) of tiny white lights which fell from the top floor.  It was as if being in the midst of the cieli (heavens), with all the stelle (stars) shining all around me.

If you have seen any magical Christmas light displays, please share them with me!