The other day at a consignment shop, I found a ceramic wall statue with a white face and brightly colored fruits surrounding the head.  It reminded me of a Della Robbia-type of ceramic. 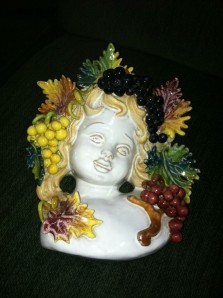 In reality, Della Robbia really only made religious plaques…but the brightly colored flowers is what reminded me of the style.  And this led to my investigation into the ceramics called Della Robbia’s.  Lo and behold, so many examples of Della Robbia’s started popping up all over the place.  Walking around Los Gatos, near St. Mary’s Catholic Church, I saw a wall plaque.  On the side wall of St. Nicholas Church in Los Altos was another one.  At the convent at Dominican College in San Rafael – yet another!  It’s amazing how you begin to notice art when you are conscious of it.  I have walked by those plaques in Los Gatos and Los Altos millions of times and never paid any attention to them.   Last weekend, while visiting the Victorian Avant Garde exhibit at the Palace of the Legion of Honor in San Francisco, I came face to face with one as I was walking through the museum to get to the exhibit.  This was an original one by the famed Andrea Della Robbia! 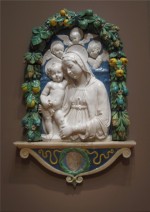 In my own  collection, I have two Della Robbia’s.

This one is for sale in my shop here.

The other one is a family heirloom which holds meaning for me.  It belonged to my husband’s grandmother and graced her walls for many years.  It is very old and I’m lucky to have it as a treasured possession.

In the tiny, unassuming town of Radicofani, Tuscany, can be found four Della Robbia masterpieces in their church.

The locals believe that Andrea Della Robbia hid his formula of glazing terra cotta in one of their statues.  They have even gone to the extreme of xraying the statues, but to no avail.  Since the only way to see if the document spelling out the secret formula lies within in one of the pieces would require breaking it, they have decided to leave it hidden for now!  The technique seems to have been carried down through the ages just fine.

Andrea Della Robbia was one of the most important ceramic artists of Renaissance Florence.  He learned the technique of glazing terra cotta from his uncle, Luca Della Robbia, and perfected the technique in his own studio.  This technique gained a lot of popularity because his altar pieces could be made more colorful and at a lesser expense than marble altarpieces – and they were MUCH lighter to transport.  His statues and plaques have the distinctive blue background with the white reliefs of Jesus, Mary, Joseph and the Saints.  At times, the plaques are surround by colorful fruits and flowers. Today, several ceramic studios in Italy make these beautiful plaques.

Many areas of Italy are known for their ceramics – Deruta, Sicily, Sorrento, and Tuscany…with Deruta being the most famous.  The ceramics of Deruta are prized for their beauty and their quality.  I have many ceramics from Deruta in my collection, but recently, I purchased some ceramics from Montelupo Fiorentino in Tuscany.   The Tuscan ceramics are beautiful in their own right – with designs a bit more rustic than those of Deruta, but well suited to a Tuscan home.  The look is different, but no less attractive.

Montelupo Fiorentino became a center for ceramics back in the Middle Ages when the Florentine Republic took over the area. Its strategic position between Florence, the Apennines, and the Tyrrhenian coast made it possible to acquire the clay, water, and transportation so necessary for ceramic production and distribution during the Middle Ages.  But it didn’t reach its peak until the 15th and 16th centuries when the de Medici’s made it their center of ceramic production.  At that time, it began exporting around the Mediterranean and gained in popularity for it’s sturdy and beautifully decorated pottery.

Montelupo Fiorentino was hard hit during the plague of the 17th century.  Production slowed down considerably due to the lack of labor and the economic recession…and it wasn’t until a resurgence in the 19th century that Montelupo Fiorentino once again became a major center of Italian majolica.

Today, the town has numerous ceramic shops and production is once again rivalling that of it’s Renaissance hey day.

While traipsing around Abbott Kinney  in Venice, California last weekend, I found this ceramic treasure!

It was sitting all alone on an outside shelf, just waiting for me to find it.  It caught my eye immediately…and I knew I had to have it.  The rich burnt yellow color and rustic texture was just what I was searching for to put on my window sill in my Italian kitchen.

There was no price tag on the piece…and upon closer inspection, I noticed that it had some fine cracks in the glaze.  It was not perfect….but, that gave it the charm that so attracted me.  What kind of piece was it?  Where was it from?  Is it old?

I approached the owner of the store – obviously someone who loves old Italian and French things because her store was full of them – and asked about the piece.  It’s OLD…It’s ITALIAN…and it’s only $75!  Hmm…$75 seemed a bit steep to me, but knowing that Vietri pieces (which look like this) can go for LOTS more, I decided to take a gamble on it and buy it.  Unfortunately, I don’t know if any of the information she told me is accurate – the piece is not marked and I have no way of authenticating it!  But, irregardless, I LOVE it so I guess it’s a treasure…no matter what! 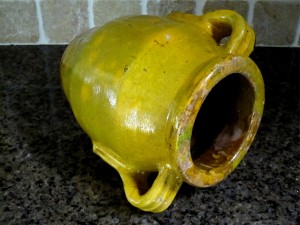 PS – Does anyone have any information on pieces like this?

The Italian art form of Maiolica was born in the red-clay hills of central Italy during the 14th century.  This art form featured vividly-colored pigments painted on a background of creamy white tin glazes.  Initially, the ceramic objects were created mostly for everyday purposes, and they incorporated designs based on abstract and geometric motifs.  Etruscan designs also offered inspiration.  Then human portraits and family coat-of-arms became popular.  Portraits were given to loved ones in the Coppa Amatoria, or “Lover’s Cup”, and the coat-of-arms were painted on plates to impress guests.  Finally, during the height of the Renaissance period, inspiration was derived from the Great Masters such as Michelangelo, Raphael, and Da Vinci, and art was created solely for the purpose of art’s sake.  These artists created an array of designs comprising flowers, fruits, scrollwork, cherubs, vines, and borders in vivid patterns and colors that are still valued today.  Their creativity flourished with the Istoriatos – historical or mythological stories painted on pottery using narrative scenes along with gracious figures perfectly depicted.  The ceramic arts became as important as paintings and sculptures and were prized by the nobility.  The rise of Maiolica’s popularity was in direct correlation to the great wealth amassed by the aristocracy during this time and was crucial to the pursuit of excellence in all the arts during the late 15th and the early 16th centuries.

Maiolica is still produced in Umbria, Tuscany, and many other regions of Italy as it has been for the last 500 years by an unbroken line of master crafters.  Many of the patterns which existed during the Renaissance are still created exactly as they were then.  Even though the method of production has changed over the years, the creativity of each piece is still the same.  The quality and artistry of a beautiful Maiolica piece still adheres to ancient traditions, especially that of hand painting.  The workshops that fill the small streets of quaint towns such as Deruta give testimony to the unchanging characteristic traits of a beautiful and prized Italian Maiolica piece.   It is still, and always will be, a highly valued art form.

These beautiful ceramics, along with my love of Italy, inspired me to establish my little business which I lovingly named Tesoro, which means treasure in Italian.  It’s an appropriate name for these little gems, don’t you think?

You can view my online shop by clicking here:  Tesoro Treasures