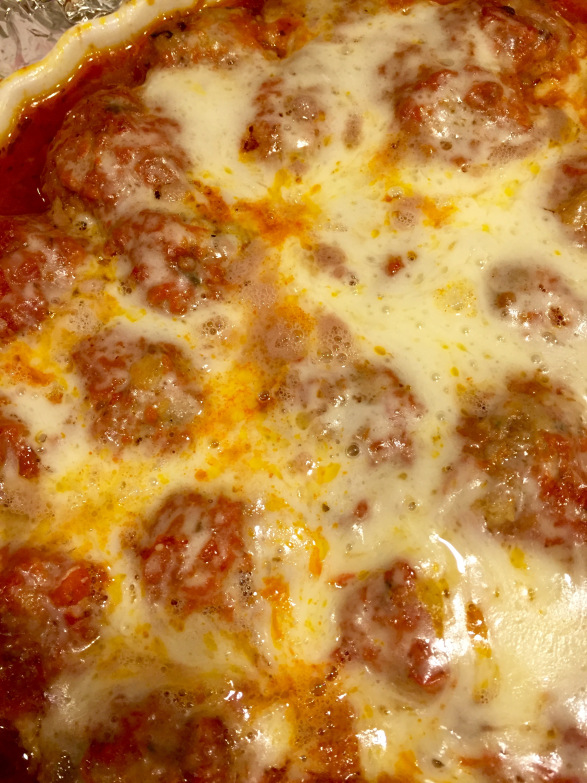 I haven’t done a foodie post in a while! Not that I haven’t been cooking, it’s just that lots of the things I’ve made haven’t really had an Italian flair. But this one, definitely has that Italian taste to it! Looking at the picture, it looks like a pizza, doesn’t it? But really, it’s a plate full of medium sized meatballs covered with tomato sauce and mozzarella cheese! Delizioso!

Mix together the meats, garlic, parsley, bread crumbs, eggs, and parmesan cheese in a bowl. Season with preferred seasonings. Form the meatballs (not too large – about 1 inch in diameter) and set aside.

Pour some sauce in the bottom of a casserole dish. Position the meatballs all around. Cover the meatballs with the remainder of the sauce. Top with mozzarella cheese.

Cover with foil and cook in the oven until the meatballs are cooked through (about 45-50 minutes). Be careful taking the dish out of the oven as the sauce may have boiled over.

While rummaging through my arsenal of “to be tried” recipes, I came across this one. It was printed in Italian, and therefore, probably from some Italian site I frequently look at (but, unfortunately, I don’t know which one). Thankfully, I had had the foresight to print this out, because it was delicious! Such a simple concept – and why didn’t I ever think of trying this on my own without a recipe? Hmm…sometimes the simplest things are those not thought of. Now I’m wondering what other vegetables would lend themselves to this dish. Eggplant comes to mind immediately, but perhaps something like peppers would be interesting, too. So many possibilities…

Spread some olive oil on the bottom of a casserole dish (I used a square one and it was the perfect size). Sprinkle some breadcrumbs over the oil. Begin by placing a single layer of zucchini on the bottom of the dish. Sprinkle some parmesan cheese on top. Add a little salt and pepper (but go easy on the salt, or omit it altogether since the prosciutto will add saltiness to the dish). Drizzle some olive oil on top of this layer. Add a layer of prosciutto and cover that with some of the grated cheese. Repeat the process of layering zucchini (with parmesan cheese and olive oil), prosciutto and cheese until you run out of zucchini. Sprinkle the top with some breadcrumbs and drizzle with some olive oil. Bake in a 400 degree oven for about 20 minutes or until the top is golden brown and the zucchini is softened. Enjoy!

I have created a similar version to this and called it Eggplant Parmigiana countless times.  Breaded eggplant, marinara sauce and cheese baked in the oven until the cheese melts and becomes a bit golden – that was the perfect parmigiana!  But this time, I added some toppings…and so, it was transformed into a pizza!  No toppings = parmigiana; toppings = pizza!

1 to 2 beaten eggs, with a bit of salt and pepper added

Pizza toppings:  prosciutto, mushrooms, peppers, salami, whatever you like!

Take the eggplant slices and coat them first in the beaten egg, and then lightly in the breadcrumbs.  Shake off any excess breadcrumbs.

In a hot pan with sufficient olive oil to coat the bottom, brown the eggplant slices so that they are golden.  Once each slice has browned, blot them on some paper towels to remove any excess oil.

Place the eggplant slices on a cookie sheet.  Cover each slice with some marinara sauce and some shredded cheese.

At this point, you can get creative and put whichever other topping you’d like, as if you were topping a pizza!

Bake the pizza’s in a 425 degree oven until the cheese melts and turns golden.